In the Central dogma of molecular biology, RNA production is the intermediate step for protein synthesis. The genes encoded in the DNA are read and transcribed by the RNA polymerases (RNAP) into RNA, part of which, called messenger RNA, is subsequently translated into proteins by the ribosomes. 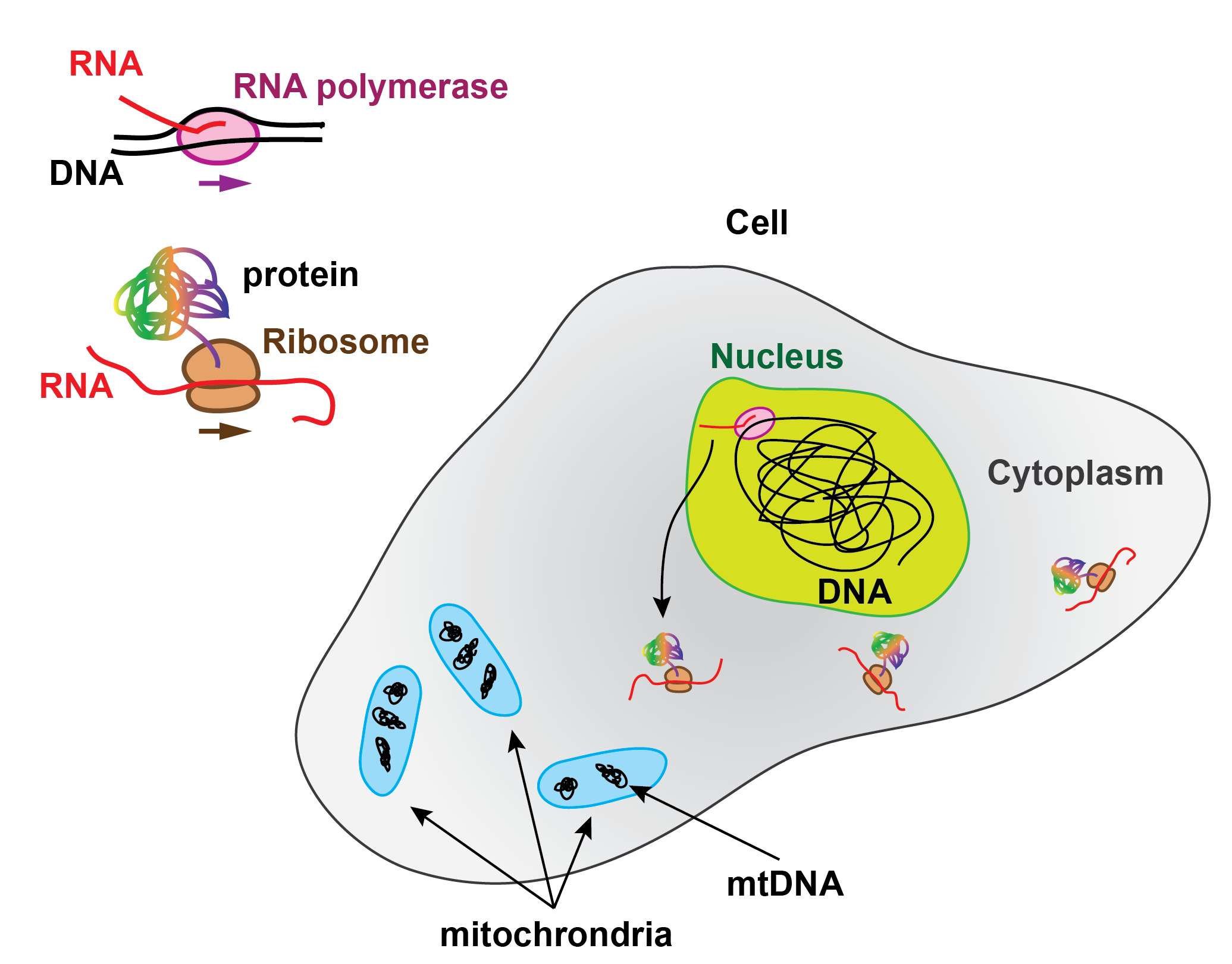 Schematic view of an eukaryotic cell and of the Central Dogma in molecular biology.

Being a key process in gene expression, transcription is therefore highly regulated in cells and is divided in three steps, i.e. initiation, elongation and termination.

During initiation, the pre-initiation complex (PIC), formed by the RNAP and its associated factors, recognises the promoter, i.e. a DNA sequence that precedes the gene, and binds to it specifically, which forms the RNAP-promoter closed complex (RPc). The PIC subsequently opens the DNA promoter to make a transcription bubble, which forms the RNAP-promoter open complex (RPo) and places the RNAP active site at the transcription start site of the gene. In the presence of nucleotides (NTP), the RNAP initiates RNA synthesis (RPitc, itc: initially transcribing complex), which leads to either promoter escape towards elongation and dissociation from the PIC co-factors, or to abortive initiation, i.e. release of the nascent RNA, bringing the PIC back to the RPo stage. Interestingly, some promoters are rate-limiting for gene expression at the RPo stage, which is driven by promoter-PIC interactions, others at RPitc, driven by the initially transcribed sequence. Understanding the nature of these interactions and how they modulate promoter-based gene expression regulation is therefore of great importance. 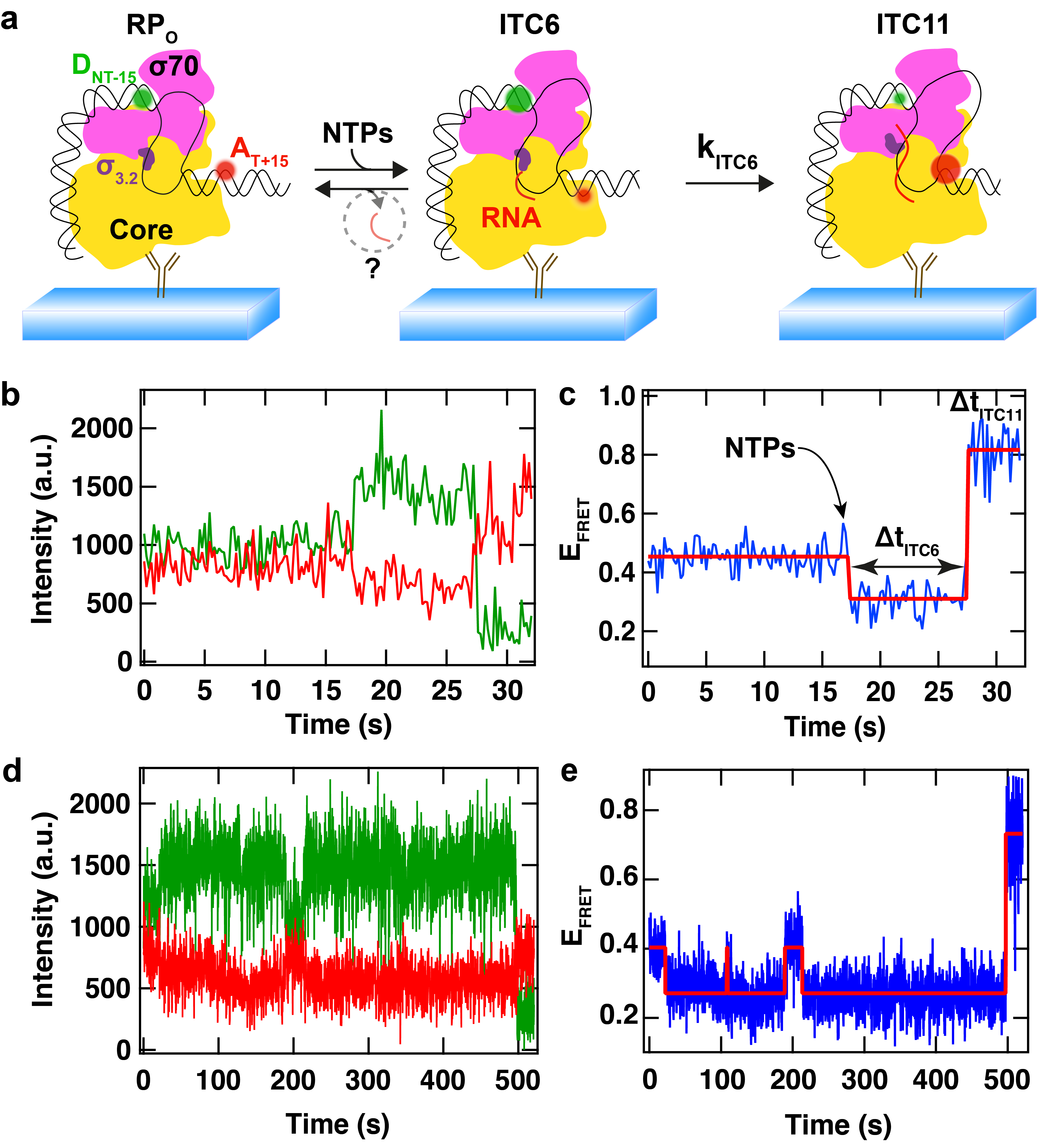 (a) Schematic of bacterial RNAP initial transcription study using single molecule FRET. The donor dye (D, green) and the acceptor dye (A, red) flank the transcription bubble. Upon NTP addition, the downstream DNA is scrunched in the RNAP, while the upstream DNA is static, which modifies the distance between the two dyes, leading to a change in FRET efficiency. (b) Fluorescence intensity of the donor (green) and of the acceptor (red) dyes. (c) FRET efficiency calculated from (b). The FRET efficiency (blue) first decreases upon addition of NTPs and the synthesis of the first 6 nucleotides of RNA (ITC6) by the RPitc, which pauses before extending the RNA to 11mer. The red step line is the Viterbi trace recovered from a Hidden Markov Model (HMM) to detect the changes in FRET efficiency. (d, e) Another FRET trace acquired in the same reaction conditions, though showing a completely different pausing behaviour. Adapted from Dulin et al., Nature Communications 2018.

During elongation, it has been shown that the RNAP encounters various type of pauses that halt transcription. These pauses are important regulatory checkpoints for, e.g. transcription factor to bind the RNAP, to synchronise with co-transcriptional processes such as translation in bacteria. The high throughput capability of our magnetic tweezers assay offers the possibility to deeply probe transcription elongation and characterise rare – but relevant – biochemical states. 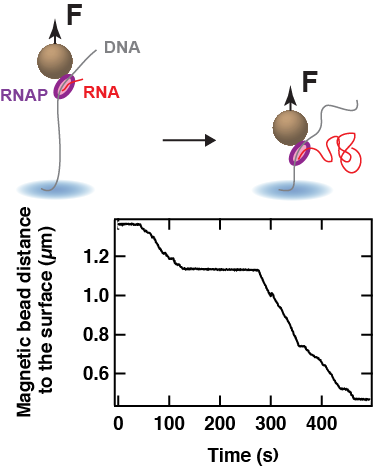 Elongating bacterial RNAP observation using a magnetic tweezers assay. The magnetic bead is bound to an RNAP that pulls the bead down against a constant force F while transcribing. The trace shows pauses of varying duration interrupting transcription.

(a) Schematic of the human mitochondria genome, with the transcription promoters LSP, HSP1 and HSP2, and the termination binding site for MTERF1 positions indicated. MTERF1 blocks RNAP coming from LSP, but not from HSP1 and 2. (b) Structure of MTERF1 bound to the termination site, and termination site sequence with heavy and light strands (HS and LS, respectively) indicated.

The Dulin lab has strong expertise in RNA virus replication study at the single molecule level, having pioneered the first studies of elongating viral RNA-dependent RNA polymerases (RdRp’s), the polymerase responsible for the synthesis of all viral genome. In particular, we focus our research on (+)RNA virus replication, i.e. virus of which the viral genome encodes directly the viral proteins. As any virus, (+)RNA viruses need the host cell translation machinery to synthesise the viral proteins from the 5-30 kilobases long viral genome. 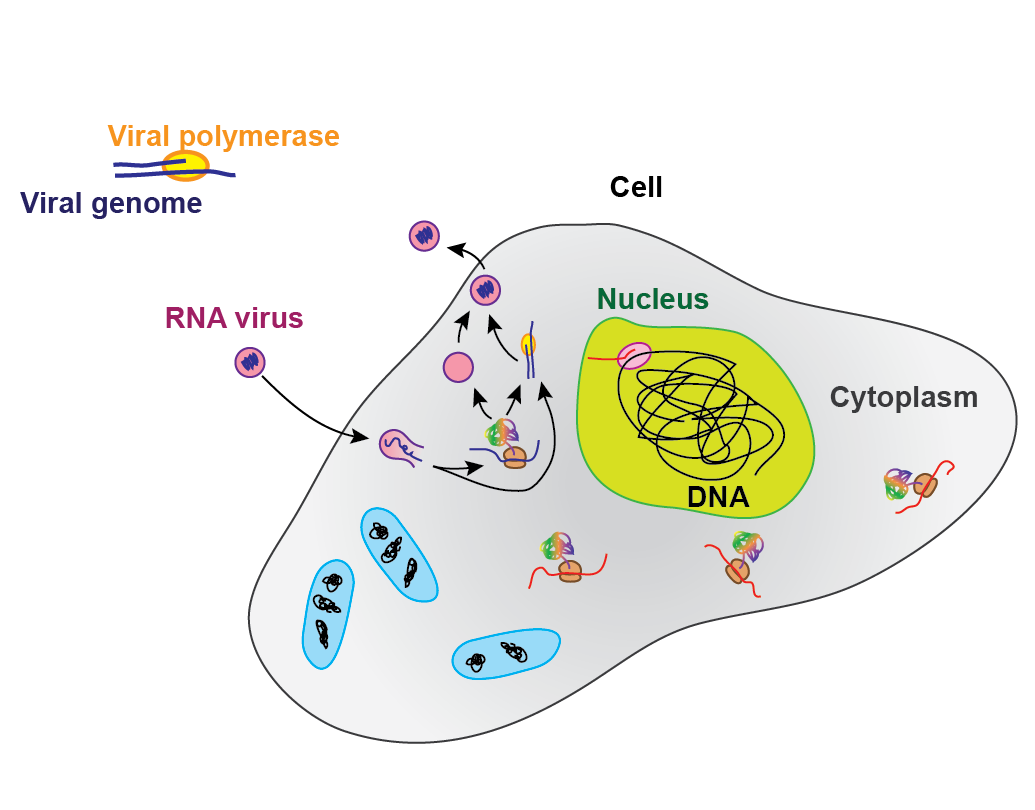 Schematic of the Central dogma in molecular biology, including (+)RNA virus genome processing.

Furthermore, the viral RdRp is also largely responsible for virus evolution and adaptation to the host antiviral defence mechanism, as it incorporates mutations in the viral genome and assist viral genome recombination, i.e. the mechanism by which part of the genome of two viruses are recombined to form a new viral genome. Given its importance, the viral RdRp is an important target for both drugs, e.g. antiviral nucleotide analogues, and vaccine development, e.g. by affecting the RdRp replication fidelity. Therefore, understanding viral replication kinetics and viral replication machinery interactions with the viral genome is of utmost importance. To characterise the mechanism of nucleotide misincorporation by the viral RdRp, we need a technique that allows the observation of rare (misincorporation probability ~0.001-0.0001/nucleotide incorporation) and asynchronous events. Furthermore, we need near single nucleotide spatial resolution and ~10-100ms temporal resolution, while using kilobases long template to collect enough miscincorporation events. High throughput magnetic tweezers are particularly suitable to solve this conundrum, as it offers the possibility to follow hundreds of polymerase simultaneously on kilobases long template, with ~0.3 nm tracking resolution at 1 s and constant applied force. 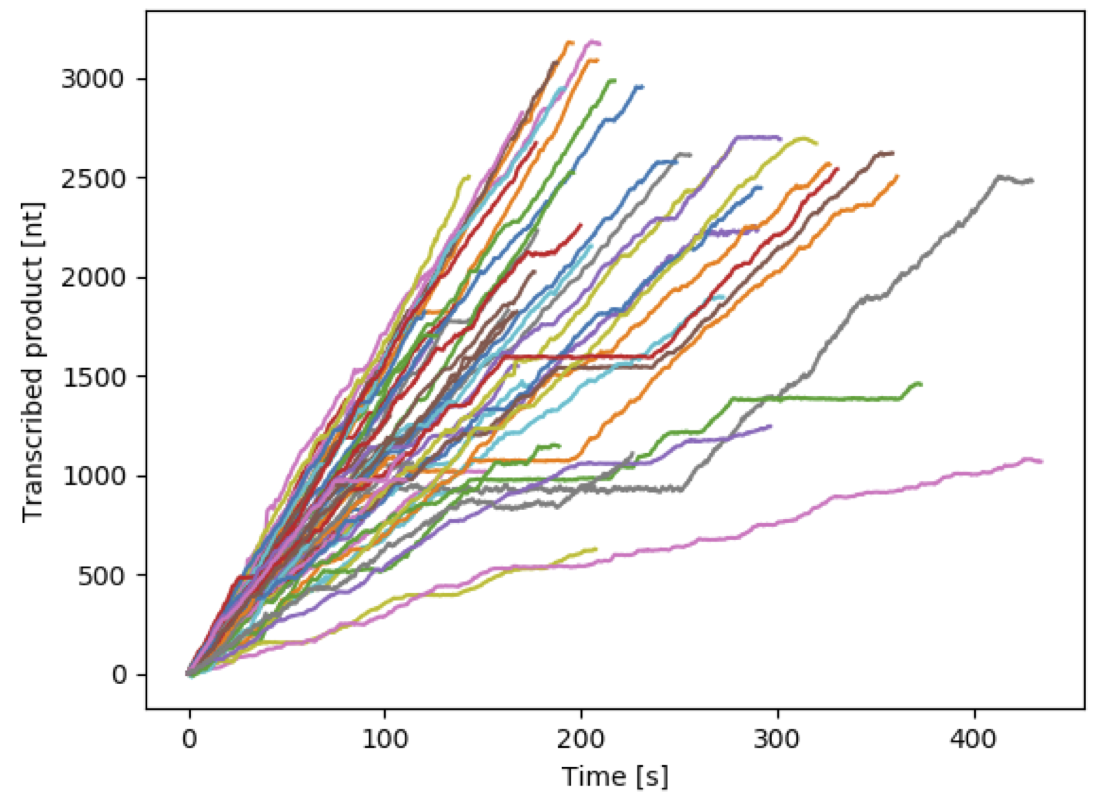